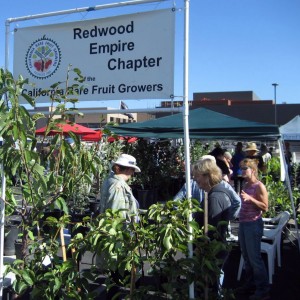 Every July, we host our annual Summer Plant Sale Fund Raiser open to the public.

Each winter, CRFG members get together to graft trees of interesting varieties of apples, pears, cherries and plums. We grow them out in 2-5 gallon containers and offer them for sale in July at low prices, ready to be planted out or potted up into larger containers. In addition, members bring in an astounding variety of other rare and unusual fruiting plants for sale.

Our goal is to offer trees not easily available commercially — especially rare and heirloom varieties with a local history. Proceeds raised from sale of our trees are used for worthy causes like grants, scholarships and helping to rescue other rare fruit trees.

The date and location for the plant sale is announced each year in the late spring. Check our upcoming events page for more information.

Below, you’ll find a sampling of some of the varieties that we have offered at past plant sales.

Fort Ross Gravenstein Apple
Created from genetic material originally rescued from the very last tree at the orchard of the Russian colonists at the Fort Ross colony north of Bodega Bay 1812-1841. The Gravenstein apple is the iconic apple of Sebastopol, an early and exceptionally tasty apple good for eating out of hand and making fragrant pies and sauces. Ripens in late July/early August. Pollenizer required, will not pollenize other apples. Early bloom. More info on our unique Gravenstein varieties.

Rosebrook Gravenstein Apple
This gravenstein variety was developed in Sebastopol by Harry Rosebrook, a local grower and cider maker. This variety is famed for its especially pretty yellow-green fruits with prominent red stripes. Ripens in late July/early August. Pollenizer required, will not pollenize other apples. Early bloom, but somewhat later than other Gravenstein varieties.

Hawaii Apple
Introduced in 1945 by Sebastopol’s own William Silva from a cross of Gravenstein and Golden Delicious. This large yellow apple with reddish stripes is exceptionally sweet with a hint of pineapple flavor. Ripens in September. Requires a pollenizer.

Albert Etter Apples
In the early 1900s, Albert Etter created a number of amazing apple varieties on his ranch at Ettersburg, in remote Humboldt County, California. We are please to offer a number of these special and hard to find apples (listed below).

Pink Pearl
Possibly the best of Albert Etter’s many pink-fleshed apples, and the most well-known of his varieties. Pink Pearl is a beautiful translucent creamy yellow with a pink blush and pink flesh inside. Crisp with a tart finish. Great for tasty pink apple sauce and pies. Ripens in August. Pollenizer required. Early bloom.

The above are just a representation of the many and changing varieties available each year!